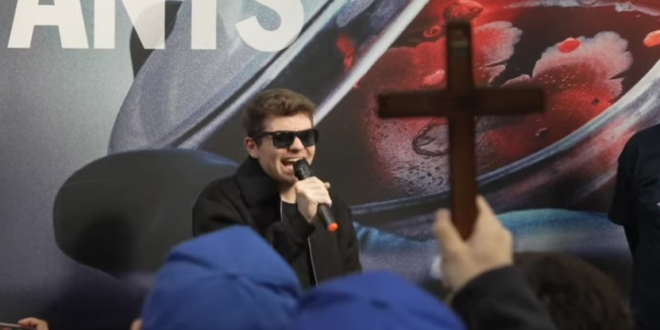 Fox Edits Its Story To Cover For White Supremacists

Fox News edited an article Sunday to downplay the presence of white nationalists at an anti-vaccine protest over the weekend, removing references to the racist activists after an initial article describing their role organizing the event prompted pushback from far-right critics.

Within a few hours of its initial publication, Fox had edited the article and its headline to remove every mention of Fuentes’ name. The headline’s reference to “White nationalists” was removed, and changed to describe Fuentes followers instead as “anti-vaccine protesters.”

Fuentes is a Holocaust-denying white nationalist who attended the deadly 2017 white nationalist rally in Charlottesville, Virginia, and encouraged the January 6 insurrection. He also led a campaign to have followers for his group, America First, harass those who they perceived as more mainstream conservatives.

Fuentes called this the “Groyper War,” with his followers calling themselves “Groypers” and claiming membership in a “Groyper Army.”

Fox News personalities have galvanized around the white nationalist great replacement theory, with Tucker Carlson name-checking it on air (to the delight of Fuentes). The ADL has called for Carlson to be fired as a result, with Carlson responding, “Fuck them.”

My report on the protest is here.

The original version of a story about far-right activists protesting a vaccine mandate called them out. After edits, the story pointed the finger only at “antifa” https://t.co/qDtMt90aXJ

Holocaust denier thanks Fox News for whitewashing its coverage of him https://t.co/YN1rlj5nkG