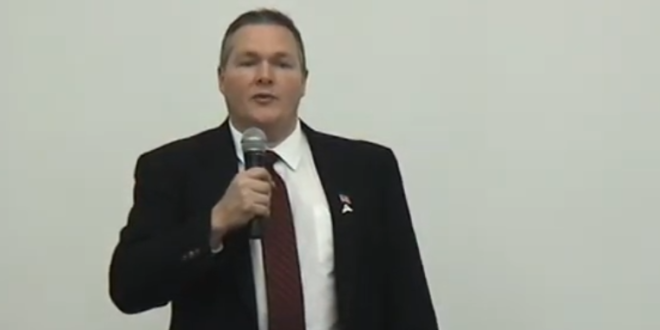 A former Republican candidate for the New York State Assembly bragged on social media that he was one of the “key players” in pushing past police lines during the Capitol riot on January 6, according to charging documents unsealed in federal court this week.

Arrest warrants for Gregory Purdy, his brother Matthew Purdy and a third defendant, Robert Turner, were authorized by a federal judge earlier this month. In addition to the four misdemeanor counts they all share, Gregory Purdy and Turner are additionally charged with civil disorder, obstruction and assaulting, resisting or impeding police.

Purdy wrote, “Peep my war cry at the end as we push through this riot team after they didn’t listen to us.” In still another post, Purdy wrote, “This was after the last videos after we successfully got through their first force!!! Look at the f****** blood on the ground.”

Read the full article. Purdy took 32% of the vote in the 2016 New York Assembly general election.

MORE: The affidavit for Greg Purdy is now available. In it, the FBI says Purdy posted that he and his group were “key players” in the mob pushing past police barriers (which he calls “peaceful pushes”). In one post he wrote “peep my war cry.” #CapitolRiot pic.twitter.com/OQEk1n3LcE

Even more posts from Greg Purdy: “This was just after we pushed the top level gates over” and “Look at all the blood on the ground.” Purdy now faces serious felony charges of obstruction and assaulting police. #CapitolRiot pic.twitter.com/syN0Oa5lB7