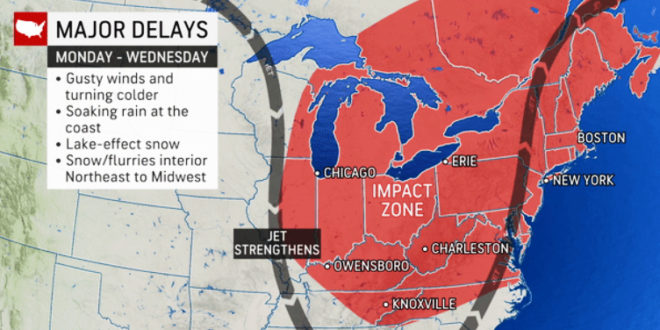 AccuWeather meteorologists are cautioning that a major stormy pattern could prove disruptive for millions of Americans who are planning to get a head start on Thanksgiving travel.

The concern forecasters have is that a significant storm could rapidly strengthen and cause a host of disruptions from the Midwest to portions of the Great Lakes, interior Northeast and mid-Atlantic over the weekend and the days before Thanksgiving.

Repercussions of any storm that may develop in the days ahead of the holiday, AccuWeather forecasters warn, could be far-reaching and have lingering effects on the Wednesday before Thanksgiving, which is considered one of the nation’s busiest travel days of the year.

The storm system could begin to develop Sunday in the Midwest, strengthening daily. By the time it gets near the East Coast on Tuesday, a secondary system could develop along the coast, exacerbating the disrupting weather conditions in places like New York.

“Even as the storm moves away by Wednesday, airlines could still be dealing with significant prior cancellations with planes and crew members in the wrong place,” CNN meteorologist Chad Myers says. “This storm has really bad timing.”

Meteorologists are keeping an eye on a potential storm that could have wide-reaching impacts on holiday travel next week: https://t.co/F7Y3gytGeg