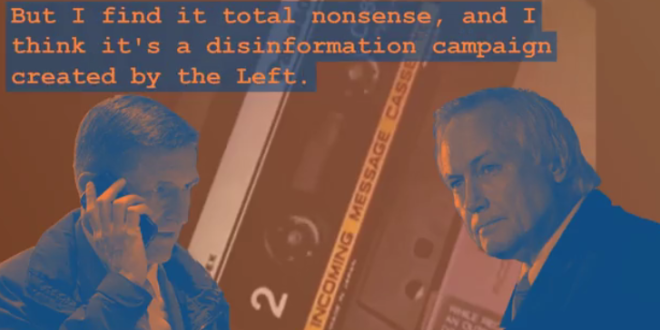 Former Trump national security adviser Michael Flynn has embraced his position as a hero to QAnon conspiracy theorists. He took the QAnon oath, sold QAnon T-shirts, and even auctioned off a QAnon quilt. He appeared at a QAnon convention and signed books with a QAnon slogan. Some QAnon followers even believe that Flynn is “Q,” the mysterious figure behind QAnon.

But a recording released late Saturday night by a one-time Flynn ally suggests that the retired three-star general privately believes QAnon to be “total nonsense.” On Saturday night, pro-Trump lawyer and QAnon booster Lin Wood released a recording of what purports to be a phone call between Wood and Flynn on Telegram. The audio’s publication comes amid a right-wing civil war pitting Wood against one-time allies like Flynn.

Read the full article. There’s so much more delicious infighting. The article that Flynn mentions in the audio? Yeah, it’s by a notorious white supremacist.

The world of QAnon has erupted in civil war after QAnon hero Michael Flynn was caught on tape calling QAnon “nonsense.” https://t.co/Hr2IfLjFGR

Here we have Michael Flynn speaking to Lin Wood about ‘QAnon’, revealing he now believes it was created as disinformation by “the left” but also someone trained by the CIA. Disappointing for Q supporters who worship Flynn and his thin grasp on ideology. pic.twitter.com/jLrGHFuOVo