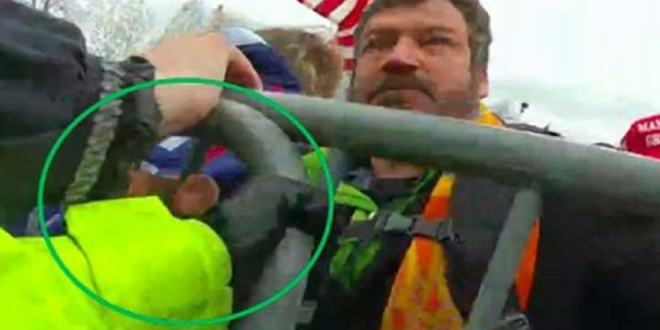 A man on the FBI’s Most Wanted List for allegedly attacking police during the Jan. 6 U.S. Capitol riot is now seeking asylum in Belarus, the ex-Soviet country’s state-run television reported Sunday. Evan Neumann, 48, is wanted in the United States on charges of violent entry and disorderly conduct on Capitol grounds, as well as for assaulting, resisting and obstructing law enforcement during civil disorder.

Neumann sold his California home in spring and was thought to have moved to Ukraine to evade arrest, ABC News reported this summer. Neumann “sought justice and asked uncomfortable questions” following the 2020 U.S. elections disputed by ex-President Donald Trump, the presenter added, “but lost almost everything and is being persecuted by the U.S. government.”

Read the full article. According to the report, Neumann crossed illegally into Belarus after spending months in Ukraine. Belarus, as has been widely reported, has launched a brutal crackdown on migrants and refugees.

If he thinks the U.S. government is persecuting him, he’s in for quite a surprise https://t.co/GTysFuHglL

“Goodbye, America!” That’s the title of this segment on Belarusian state TV in which American Evan Neumann of California explains he fled the US to evade the FBI. He’s wanted on 6 counts related to the Jan. 6 Capitol insurrection and now wants asylum in authoritarian Belarus. pic.twitter.com/ncxebdfylO

A California man who is on the FBI’s Most Wanted List for allegedly attacking police during the Jan. 6 Capitol riot has claimed asylum in the former Soviet republic of Belarus https://t.co/aGVKrOtyYJ

WANTED! Evan Neumann aka #DrunkedTrashStache is wanted by the FBI. He has been charged in connection with the Capitol Riot and is currently a fugitive from Justice. #CapitolRiot #SeditionHunters #Wanted #wednesdaythought PLEASE RETWEET! pic.twitter.com/rXeLnHq3i5