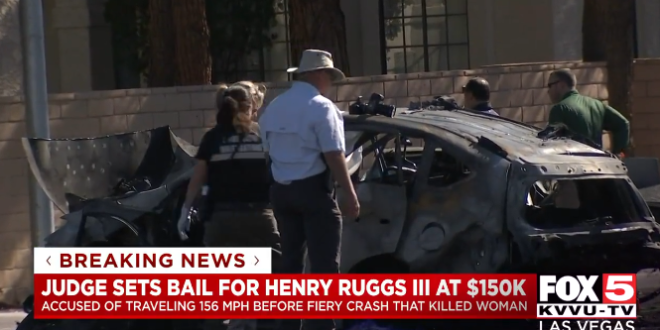 Raiders wide receiver Henry Ruggs III was driving 156 mph with a blood-alcohol content twice Nevada’s legal limit before his car slammed into the rear of a vehicle that burned, killing a 23-year-old woman, according to prosecutors.

Ruggs had his initial court appearance Wednesday on felony charges of driving under the influence of alcohol resulting in death and reckless driving that could get him up to 26 years in state prison if he is convicted. The Raiders released Ruggs late Tuesday, just hours after the crash, his hospitalization and his booking into a Las Vegas jail.

Prosecutors said Ruggs was traveling 156 mph two seconds before the crash and was at 127 mph when the air bags deployed in his vehicle. The Raiders didn’t wait for courts to act, sending out a brief statement Tuesday night announcing Ruggs’ release.

Former Raiders wide receiver Henry Ruggs appears in court this morning following his arrest on suspicion of DUI in a fiery crash yesterday that left a 23-year-old woman dead.

Prosecutor Eric Bauman said Ruggs was traveling at 156 mph about 2 seconds before the crash. He was at 127 mph when airbags deployed.

Raiders WR Henry Ruggs III will be charged with DUI resulting in death after his involvement in a fatal car crash this morning in Las Vegas. He was treated for non-life-threatening injuries. pic.twitter.com/QqFEbZ89pb

I’ve obtained witness video of the crash that involved @Raiders WR Henry Ruggs III. The car on fire is the Toyota Rav 4 that was involved. You can hear pops coming from the car on fire. Witness tells me she heard a loud bang as the crash happened. Credit: Aimee Rego @KTNV pic.twitter.com/ikXdUvNVDY

Bail was set at $150K for ex-@Raiders player Henry Ruggs III after he was accused of traveling 156 mph before a fiery crash Tuesday that killed a 23/yo woman and her dog in Las Vegas. Prosecutors say Ruggs’ BAC was more than twice the legal limit.
DETAILS: https://t.co/mn8mGoyfOT pic.twitter.com/IKKIJNpDcs