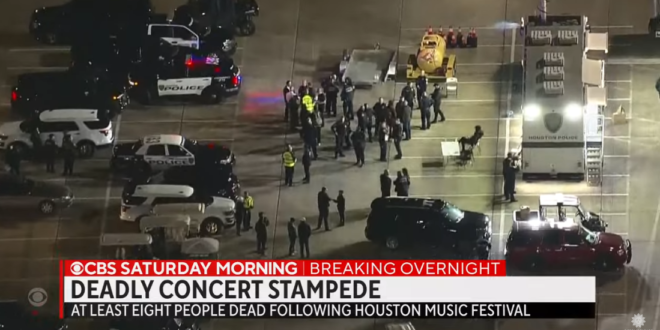 Eight people died Friday night and hundreds of others were injured during the opening night of a popular weekend music festival at NRG Park, authorities said. It happened at the third-annual Astroworld Festival, a sold-out concert event featuring multiple acts.

The organizers, rapper Travis Scott and LiveNation, stopped the show when it was apparent that multiple people were hurt, according to Houston Police Chief Troy Finner.

In a statement posted on Instagram, organizers said that they were “supporting local officials however we can” and that the second day of the festival had been canceled. “Our hearts are with the Astroworld Festival family tonight — especially those we lost and their loved ones,” the statement read. Twenty-three people were taken to nearby hospitals by emergency responders, Chief Peña said, adding that of those patients, 11 were in cardiac arrest. Over 300 people were treated at a “field hospital” at the site, he said.

Accounts on social media, which could not immediately be verified, described people gasping for breath in the crush of the crowd and calls for help going unheeded. Videos showed one person climbing up onto a riser, where a cameraman was working, and calling for the performance to stop, shouting that people were dying; other people can be heard insulting him and telling him to “calm down.”

“The crowd began to compress towards the front of the stage”

Fire Chief says panic spread when people in crowd began to pass out at music festival in Texas where eight people died and many were injured https://t.co/TT4Cbfn0OA