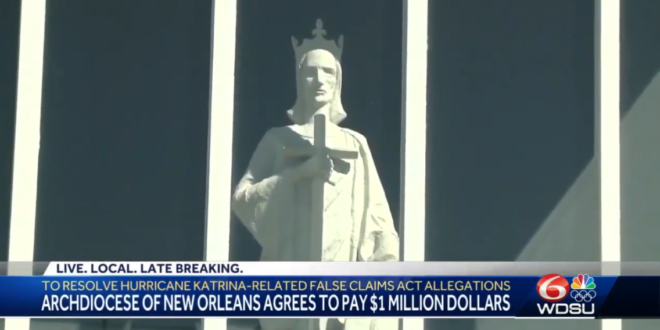 DOJ: Archdiocese Ripped Off FEMA For Over $1 Million

The Roman Catholic Archdiocese of New Orleans has agreed to pay more than $1 million as part of a settlement over allegations of falsified Hurricane Katrina aid claims.

The settlement came in response to allegations that the archdiocese had violated the False Claims Act by knowingly submitting false claims to the Federal Emergency Management Agency (FEMA) to repair facilities damaged by Katrina, a 2005 Category 5 storm that caused billions of dollars in damage.

Last year, a lawsuit was filed accusing the archdiocese of signing certifications for FEMA funding from 2007 to 2013 that contained inaccurate damage descriptions and repair estimates.

The settlement resolved allegations originally filed in a lawsuit brought under the qui tam or whistleblower provisions of the False Claims Act by Robert Romero, an AECOM Project Specialist.

The False Claims Act permits private parties to file suit on behalf of the United States for false claims and to share in any recovery.

The False Claims Act also permits the United States to intervene in such an action, as it did in this case, in part, against AECOM, the Archdiocese of New Orleans, and other disaster relief applicants in June 2020.