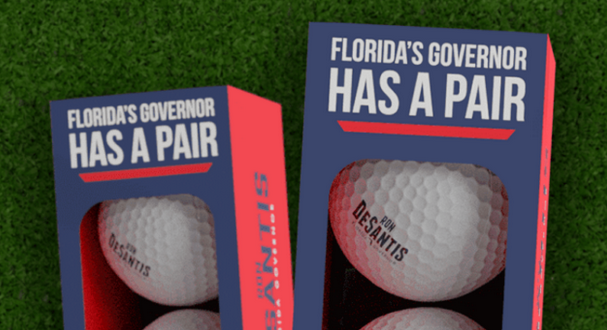 DeSantis Boasts About His Balls With New Merch

Florida’s Governor has a pair. That’s the slogan emblazoned on new merchandise — golf balls — that debuted Wednesday as the Legislature made a decisive drive toward passing legislation Gov. Ron DeSantis called for to fortify Florida against those pesky federal vaccine mandates.

“Hold the line,” says the box, under the line about the Governor having a pair. Even if the line isn’t isn’t specified on the new merchandise, there’s plenty of double entendre. Allusions to anatomy abound.

“Standing firm and setting an example for the rest of the nation in defending freedom as it comes under assault has become par for the course with Governor DeSantis,” reads an email making the rounds with the advertisement to his store.

RT: Got balls? @GovRonDeSantis launches edgy new merch, announcing he has a pair

.@RonDeSantisFL had the courage to stand his ground and fortify Florida as the model of freedom. Now, we’ve got the golf balls to back it up. 👀

The Fortified in Florida Golf Ball Set is available EXCLUSIVELY on our storefront! Get yours ⬇️🔥https://t.co/X7zY3NZGY4 pic.twitter.com/cRvbbmrSks