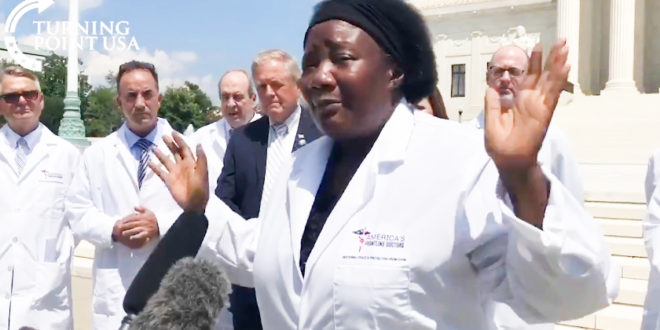 A Houston doctor received “corrective action” from the Texas Medical Board in October after prescribing hydroxychloroquine to a patient suffering from COVID-19 without warning them of the possible health complications.

Immanuel told the Houston Chronicle that she had given the drug to “hundreds” of her patients. Immanuel must “adopt policies that require all consent documents to be reviewed and signed by the patient for off-label treatment,” according to the Chronicle.

The medical board also fined Immanuel $500. These actions, however, were considered only corrective in nature by the medical board, and as a result, will not cause any marks against Immanuel’s record.

Immanuel last appeared on JMG when she declared that political leaders and top health officials worldwide are Satanic blood-drinkers.

Before that we heard from her when she revealed that Satan has dispatched an army of clones to murder anybody who refuses the vaccine.

She first gained national headlines last year when she claimed that ovarian cysts are caused by women having sex with demons in their dreams.

Her tweets have been promoted by Trump, Trump Junior, Charlie Kirk and a clown car cavalcade of crazy crackpots.

The co-founder of Immanuel’s America’s Frontline Doctors has been arrested over her actions during the Capitol riot.