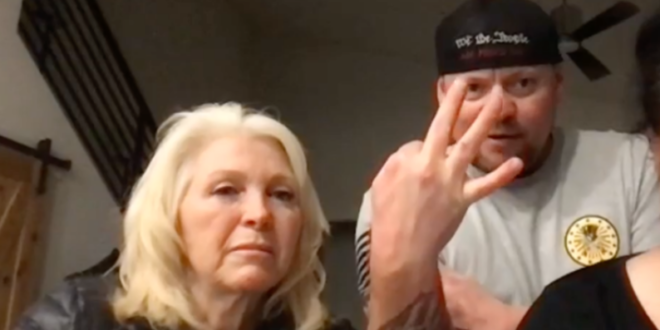 Tina Peters, the Mesa County clerk who is under criminal investigation for her alleged involvement in a security breach of election systems in her own office, appeared on a video call last week with supporters of the Three Percenter militia.

The video was posted Thursday on the America’s Mom Facebook page, which is operated by Sherronna Bishop, a Peters ally whose home was searched Nov. 16 by the FBI as part of an investigation related to the case against Peters. Peters’ home was also searched that day.

Peters is seen seated with Jacqueline Anderson, who last week, as reported by Colorado Times Recorder, resigned her position as first vice chair of the Mesa County Republican Party, and Anderson’s husband, activist Cory Anderson, who previously has been identified as a Three Percenter member.

Read the full article. There’s much more, including the usual threat of violence from someone else on the call. As you may recall, when the breach in Peters’ office was first discovered, Mike Lindell claimed to be harboring her in “safe houses.”