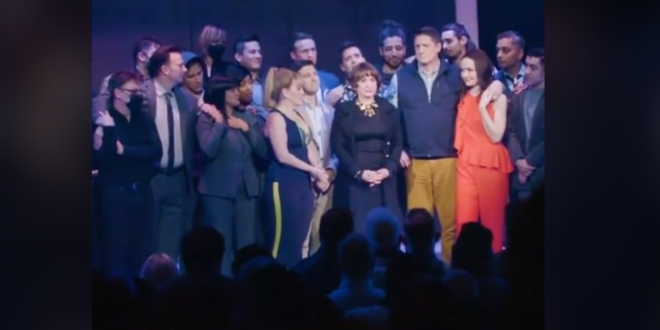 Hours after Stephen Sondheim’s death, the director of the Broadway revival of “Company” walked onstage before the curtain rose on Friday to acknowledge the news that many in the audience already knew but that some — judging by the murmurs that followed — had not yet heard.

Around the same time, 32 blocks downtown, the director of the Off Broadway musical, “Assassins,” walked onstage before the show with a similar mournful speech.

“Today is a sad day for the American theater,” said the director, John Doyle. “Stephen Sondheim changed the face of the American musical, and we feel very blessed to be in this space at this time.”

Usually when the lights go down in a Broadway house, a few minutes after 8 p.m., there’s a sort of excited quiet murmur, an exhalation as everyone sits up and prepares to take in the show. Tonight at Company there was instead flat silence.

Then Marianne Elliott, the production’s director, stepped onstage. “Truly the greatest artist in our lifetime that we possibly will ever know in this art form,” she said in her short tribute.

“I really hope tonight will be a celebration of his joy.” It took only two or three sentences before she had to pause, because the crowd was on its feet, cheering and applauding.

When Sondheim died, he had shows running on Broadway and off. There were emotional curtain speeches: https://t.co/l7KaNuWNDZ

The last of the great Musical Comedy composers has died. Steve, I will never be a able to properly thank you for the lessons learned. You are the Gold Standard.

If the clip below doesn’t play for you, view it here.

Previous GA Sec Of State Roasts Trump On Election Fraud Lies
Next Staver: Biden Is “Purging Christians” From The USMC