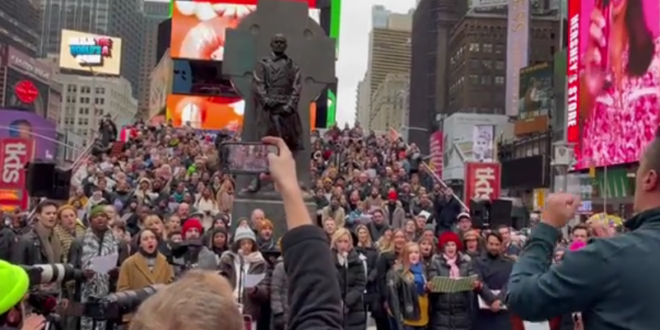 On the red stairs above TKTS in Times Square, as the first flurries of the winter season drifted down on the city, members of every Broadway company—joined by Lin-Manuel Miranda, Sara Bareilles, Josh Groban, Kathryn Gallagher and Lauren Patton—gathered in a chorus to sing “Sunday,” the heartrending act one finale to Sondheim’s “Sunday in the Park with George,” which earned the 8-time Tony-winning composer and lyricist a Pulitzer Prize for Drama in 1985.

“This felt like church,” Bareilles told Variety after the performance on Sunday. “In his remembrance, we did what theater does best. We sang and raised our voices and came together in community.” During the celebration, Miranda offered a sermon of sorts. Foregoing a speech, he opened Sondheim’s “Look I Made A Hat,” an annotated anthology of the composer’s lyrics, and read from a few passages before the crowd.

I am also an easy crier 😭
(words in video by sondheim read by @Lin_Manuel) #sundayforsondheim pic.twitter.com/qln7KNTppr