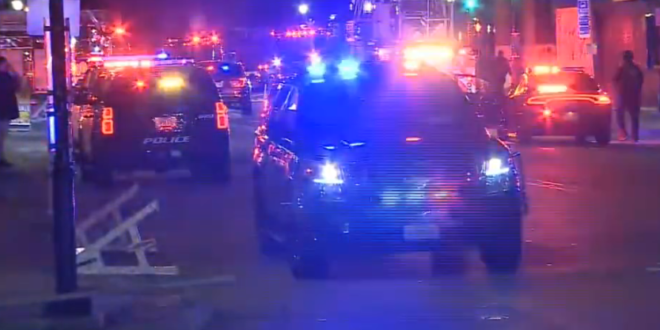 A car plowed into the Waukesha Christmas Parade Sunday evening, leaving more than 20 people injured, authorities said. “Tonight was a traumatic situation for the City of Waukesha,” Waukesha Mayor Shawn Reilly said at a news conference.

Waukesha Police Chief Dan Thompson said that at around 4:39 p.m. a red SUV drove into the Christmas Parade “and more than 20 people were injured as a result of this incident.”

A suspect vehicle was recovered and there is a “person of interest we’re looking into,” the police chief said. People were transported to local hospitals via ambulances and police vehicles, he added. “Very tragic incident, very chaotic,” Thompson said.

Photos and videos of Waukesha circulating on Twitter showed police cars and ambulances crowding a street decked out with Christmas lights in the aftermath of the incident. Bundled up people huddled on sidewalks as dusk fell.

“As we were walking back in between the buildings … we saw an SUV cross over, just put the pedal to the metal and just zooming full speed along the parade route. And then we heard a loud bang, and just deafening cries and screams from people who are struck by the vehicle,” Angelito Tenorio, an alderman in nearby West Allis, told the newspaper.

Police officers ran down the street, telling parade watchers to take shelter in stores, the newspaper said. One witness said the driver hit the “Dancing Grannies” and at least one person flipped over the hood of the SUV, according to WISN-TV, an ABC affiliate.

A live video feed of the parade from the city of Waukesha showed a red SUV breaking through barriers and speeding into the roadway where the parade was taking place. It’s unclear how many people are injured. Police said they could not immediately provide details.

Angelito Tenorio, a West Allis alderman who is running for Wisconsin state treasurer, told the Milwaukee Journal Sentinel that he was watching the parade with his family when they saw the SUV come speeding into the area.

“Then we heard a loud bang, and just deafening cries and screams from people who are who are struck by the vehicle,” Tenorio said. “And then, and then we saw people running away or stopping crying, and there, there are people on the ground who looked like they’d been hit by the vehicle.”

Kathy and I are praying for Waukesha tonight and all the kids, families, and community members affected by this senseless act. I’m grateful for the first responders and folks who acted quickly to help, and we are in contact with local partners as we await more information.

The horrific violence at the Waukesha Christmas Parade is just heartbreaking.

Please keep the victims in your prayers tonight.

THREAD- JUST IN: Per Waukesha Police Chief
– at least 1 dead, several injured @ Holiday Parade after SUV plows through the crowd

-Identified a person of interest. Does not give details about person or say if they are in custody #waukesha

Chief says it happened about 4:30

When asked about reports of shots fired, Chief says “officers tried to stop the threat.”

He does not believe any shots were fired from the SUV

There will be a press conference @ 7:30 CST #waukesha

A red SUV has reportedly just sped through a holiday parade in Waukesha, WI, injuring at least 20 people. pic.twitter.com/QauI9xoxWO

SUV speeding towards parade in Waukesha posted by a spectator on Facebook. pic.twitter.com/iDMe0HxQpv

TRIGGER WARNING: 🚨DISTURBING VIDEO🚨A viewer sent in horrifying video the moment a red SUV plowed through a crowd during the #Waukesha Holiday Parade. Its currently unclear how many people have been injured. Updates to come on @tmj4 pic.twitter.com/u6q10VgTJ1

Previous Putin Announces That He’s Been “Re-Vaccinated”
Next CHATTER AWAY: Overnight Open Thread