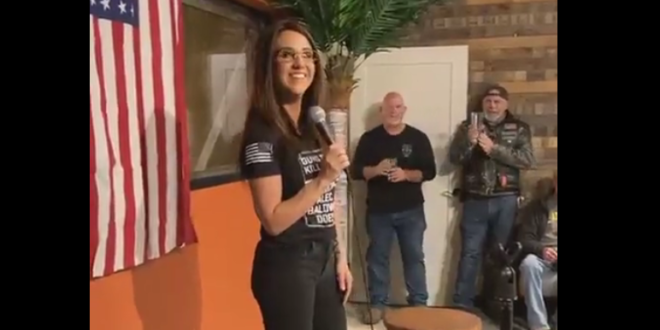 Boebert Accuses Rep. Ilhan Omar Of Being A Terrorist

“The other night on the House floor was not my first ‘jihad squad’ moment. So I was getting into an elevator with one of my staffers and he and I were leaving the Capitol, we’re going back to my office, and we get in the elevator and I see a Capitol officer running, hurriedly, to the elevator.

“I see sweat all over his face. And he’s reaching – the door’s shutting – I can’t open it. What’s happening? I look to my left and there she is, Ilhan Omar.

“And I said, ‘Well, she doesn’t have a backpack, we should be fine.’ So we only had to one floor to go and I said, ‘Oh look, the jihad squad has come to work today.” – QAnon Rep. Lauren Boebert, drawing peals of laughter from her supporters.

Over the Thanksgiving break, Lauren Boebert said she was recently in a Capitol elevator with Ilhan Omar when a fretful Capitol police officer ran up.

Lauren Boebert said: “Well, she doesn’t have a backpack. We should be fine.”

At a campaign event over the Thanksgiving break, Lauren Boebert referred to Joe Biden as “that piece of crap in the White House.” pic.twitter.com/x2vEYBADU9

If Lauren Boebert, at a campaign event, suggested Ilhan Omar was a threat to blow up the US Capitol Building, is that enough for Boebert to be stripped of committee assignments?

Previous Gaetz: I Will Intro National “Stand Your Ground” Bill
Next Alarm Raised Over New COVID Variant In South Africa