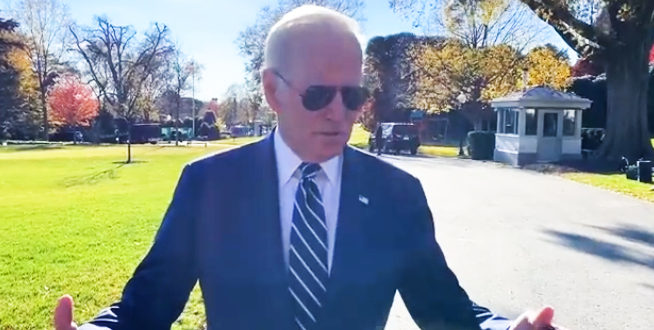 Biden: “I Stand By What The Jury Has Concluded”

President Joe Biden said Friday he stands by the not-guilty verdict in the Kyle Rittenhouse trial, saying the jury system of trial in the United States works and must be respected.
“Look, I stand by what the jury has concluded,” he said. “The jury system works, and we have to abide by it.”

The President made the comments upon returning to the White House after a visit to Walter Reed National Military Medical Center that lasted more than five hours, where he received a routine physical and a colonoscopy.

“I just heard a moment ago,” Biden said, when asked about Rittenhouse being found not guilty on all counts. “I didn’t watch the trial.”

President Biden reacts to the Kyle Rittenhouse verdict: “The jury system works, and we have to abide by it” https://t.co/JNAI3z2eva

JUST IN: Pres. Biden responds to Kyle Rittenhouse verdict: “I stand by what the jury has concluded. The jury system works and we have to abide by it.” https://t.co/3e24Bl7iaD pic.twitter.com/v8bxygFxMU

President Biden takes a few questions. Here on the Rittenhouse verdict. He said he didn’t watch trial. And then on his health as he returned from first physical as president. pic.twitter.com/d3AxmgL1oZ

Previous Cawthorn Exults In Kyle Rittenhouse Verdict: “You Have A Right To Defend Yourself: Be Armed, Be Dangerous”
Next Perkins Continues Assault On RNC For Partnership With Log Cabin Quislings, Ignores Trump’s Role In The Event