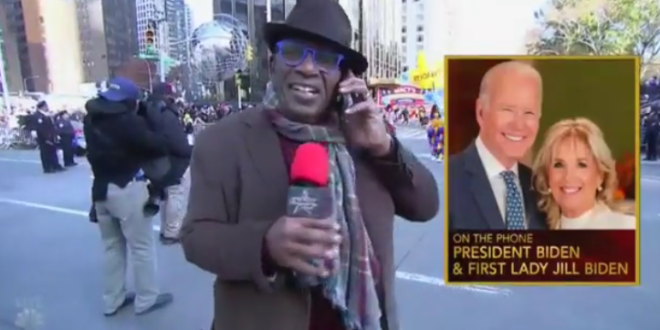 Biden Calls In To Macy’s Parade: “America’s Back”

After a year off as a scaled-down affair due to the pandemic, the Macy’s Thanksgiving Day Parade returned in full force this year, with one very special guest calling in. President Biden and first lady Dr. Jill Biden called TODAY’s Al Roker during the festivities.

“Oh my gosh, look at who’s calling,” Al said, while pointing his phone toward the camera to show the president’s face on his screen. After Al and the Bidens exchanged pleasantries, Al asked them to share a few words with the country.

“What’s your message to the American folks on this Thanksgiving Day?” he asked. “My message is after two years you’re back, America’s back,” the president said.

“There’s nothing we’re unable to overcome, Al, and you’re one of the reasons for that, pal.” –– President Biden to @alroker in a live phone call at the #MacysParade https://t.co/dTmdiEyJ1U

Did you catch the moment when President Biden and First Lady Dr. Jill Biden gave @alroker a call at the #MacysParade?

(Photo via the White House; the press pool wasn’t brought in.) pic.twitter.com/iCjTSirBbD

“My message is, after two years, you’re back, America is back there’s nothing we’re unable to overcome, Al, and you’re one of the reasons for that, pal!” pic.twitter.com/17D8UcATit

Previous POLL: 23% Of Texans “Unwilling, Unlikely” To Get Vax
Next Tory MP Blames Crime On Doctor Who Being Female