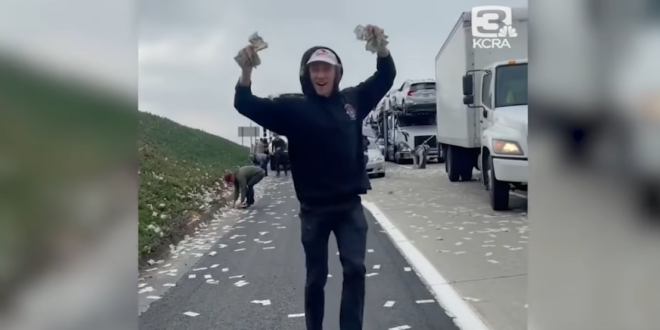 Money — a lot of it — fell from an armored truck and littered the freeway in Carlsbad on Friday morning, and drivers pulled over and started scooping it up. Cash covered the northbound lanes of Interstate 5 near Cannon Road starting just before 9:15 a.m. CHP Sgt. Curtis Martin said the truck had been headed from San Diego to an office of the FDIC. “One of the doors popped open and bags of cash fell out,” he said. “One of the bags broke apart, and there was cash all over the lanes.”

Two people believed to have stopped to collect cash were arrested at the scene. Martin said they’d locked themselves out of their car, which they’d left in the traffic lanes. The car was towed. The CHP released 16 photographs and video still frames showing some of those who scooped the cash off the road. Members of the public “are encouraged to turn in the money within 48 hours in order to avoid potential criminal charges.”

Money flew out from an armored truck and littered the I-5 in Carlsbad on Friday, and several drivers pulled over scoop it uphttps://t.co/K8Qln5GhVo

“Turn in that cash!” says CHP .. regarding the raining money on the 5 in Carlsbad. Listen … pic.twitter.com/VWgZLOD3WT