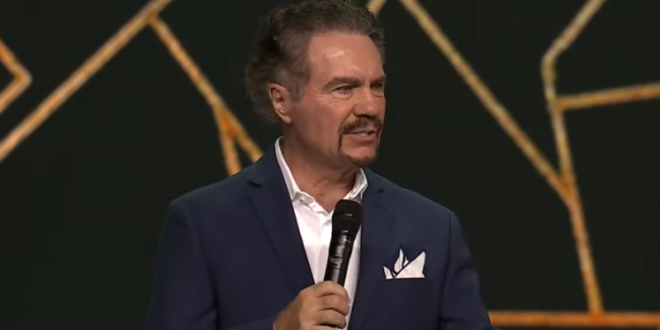 First, a reminder from last week:

Daystar Television Network, one of the largest Christian television networks in the world and The American Family Association, a nonprofit Christian organization, said in a lawsuit today that a federal vaccine mandate forcing large companies to require their employees to get the COVID-19 vaccinated is a ”sin against God’s Holy Word.” AFA and Daystar believe that if they implement the required vaccine mandate, they will wound the consciences of their employees and potentially cause them to sin,” lawyers for both organizations wrote in a court filing.

From a March 2021 report by Media Matters:

Daystar Television has repeatedly hosted notorious medical misinformers Robert F. Kennedy Jr., Del Bigtree, and Simone Gold on its flagship broadcast Ministry Now to tell viewers that COVID-19 vaccines could kill half of their recipients, to claim that vaccines would implant a tracking microchip, and to exhort people with the potentially deadly advice that the drug hydroxychloroquine, an ineffective and potentially dangerous COVID-19 treatment, is the best alternative to a COVID-19 vaccine.

In the year 2020, Marcus Lamb’s Daystar TV was forced to pay back a United States government PPP Loan after the television show Inside Edition investigated the church’s private jet purchase. Lamb’s Daystar TV applied for the government’s Paycheck Protection Program to help pay employees’ salaries. They received $3.9 million. Soon after receiving the funds, the church purchased a 1997 Gulfstream aircraft.

Previous RNC Apologizes For Messaging On New “Pride Coalition” With Log Cabin Quislings: We Still Oppose LGBT Rights
Next US To Buy 10M Courses Of Pfizer COVID Pill In $5B Deal