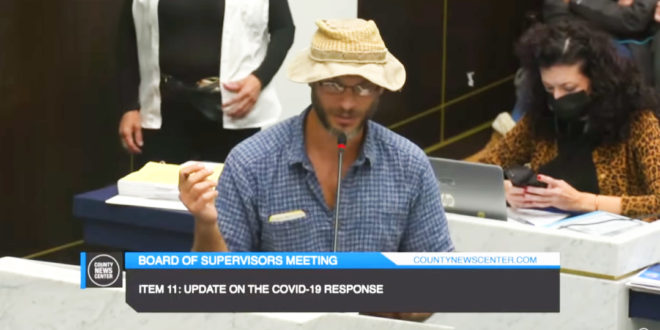 Anti-Vax Man Lobs Racist Slur At San Diego Official, Wishes For Supervisors To Be Killed Or Kill Themselves

The county Board of Supervisors voted 3-2 Tuesday to keep a vaccine mandate for new employees in place, following a lengthy and occasionally explicative-laced public hearing.

In August, the county adopted a policy requiring existing employees to either be fully vaccinated or take weekly COVID-19 tests. The mandate for vaccines applies to new county hires.

Tuesday’s meeting included some often-vitriolic public testimony, including one anti-vax speaker, who identified himself as Jason Robo, said Fletcher should commit suicide and then made a racially charged comment directed at county Public Health Director Dr. Wilma Wooten, who is Black.

One of the nearly 70 people who spoke against vaccine mandates not only wished that three of five county supervisors would die or be killed, but also tossed in a racial slur against the region’s top public health official. Supervisor Nora Vargas cut in during the comments, refusing to sit quietly during the diatribe that included body-shaming comments about her. When a racist comment was lobbed at Dr. Wilma Wooten, the Black director of the county public health department, Vargas couldn’t help but respond.

“You can call me fat all you want, but you are not allowed to say that to her,” Vargas replied. Later, during board deliberations after hours of public comments were finished, Vargas drew a line between the right in a democracy to be heard and the indefensible words that came from the podium. “The comments today are hate speech, not free speech, and that needs to stop.”

The man’s full rant is below.

Full video of Jason Robo calling Dr. Wooten "Aunt Jemima," telling @SupLawsonRemer she needs to be hung from a tree and calling @SupNoraVargas a "fat piece of sh*t." Also craziness toward @SupFletcher pic.twitter.com/5WXHnDLOSm