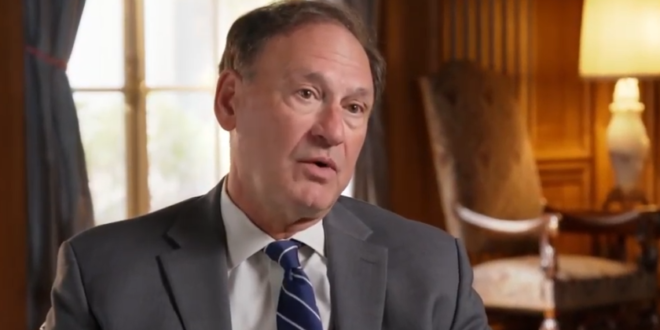 Hearing oral arguments in a major Second Amendment case on Wednesday, Supreme Court justices considered whether to dramatically loosen gun control restrictions across the county, spiraling into a debate over whether New Yorkers should be able to carry firearms on the subway. From the high court’s right flank, Justice Samuel Alito answered that question in the affirmative.

“All these people with illegal guns: They’re on the subway, walking around the streets, but ordinary, hard-working, law-abiding people, no,” Alito told the Empire State’s solicitor general Barbara Underwood. “They can’t be armed.” The case is New York State Rifle & Pistol Association v. Bruen, and it is a lawsuit brought by a pro-gun ownership group on behalf of two men denied a concealed carry license by New York State.

Sam Alito casually asserting that there are a kajillion scary, scary criminals roaming the NYC subway who are fully armed and ready to kill you is his new Peak Fox News Brain moment

In a colloquy with New York’s solicitor general, Justice Alito expresses empathy for working class New Yorkers forced to brave the city’s allegedly crime-infested subways on the way home from work, asking: Don’t they need to carry concealed guns to protect themselves? pic.twitter.com/n485J1Qy2m

Alito: “all these people with illegal guns, THEY’RE on the subway. THEY’RE walking around. But the ordinary hard working person can’t get a gun.”

Again, if you want to make the subway MORE VIOLENT, just give everybody guns with their Metrocard.

Alito is now pressing Underwood on the same issue. He invokes a hypothetical late-night worker in Manhattan who must commute through a high-crime area on the bus or the subway after midnight. That’s not enough for the worker to receive a concealed-carry permit? Alito asks.