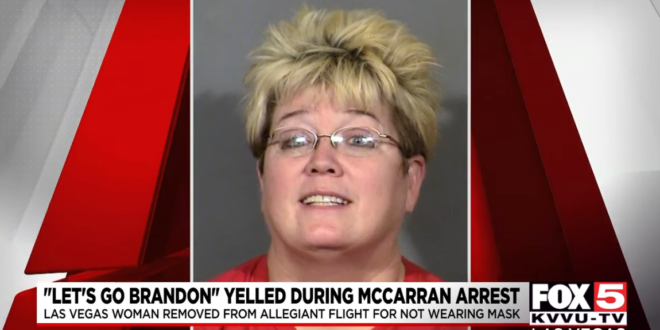 Las Vegas Metro police arrested a woman at McCarran International Airport over the weekend after a disturbance on a plane. Katrina Alspaugh, of Las Vegas, faces one charge of violating airport rules following the incident Sunday, an arrest report said.

The woman, later identified as Alspaugh, had been involved in a prior incident at the security checkpoint, police said. During that incident, Alspaugh reportedly attempted to punch another passenger that pointed out Alspaugh was not wearing her mask, police said.

According to police, as Alspaugh was being taken off the jet bridge in a wheelchair, she yelled obscenities and “Let’s go Brandon.”

BANNED FROM FLIGHT: The woman yelled obscenities and “Let’s go Brandon” after Allegiant Air banned her from flight after a disturbance over mask mandate #8NN https://t.co/SI5YNrwUfv