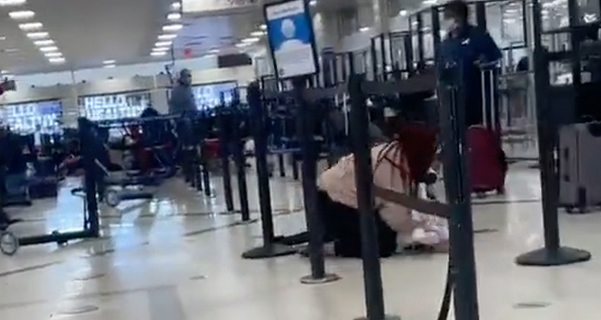 The accidental discharge of a passenger’s weapon in a security area of Hartsfield-Jackson Atlanta International Airport caused widespread panic Saturday afternoon, prompting a brief halt of departing flights over the busy travel weekend.

The passenger was going through the screening process around 1:30 p.m. when “somebody recognized that there was a weapon in the bag,” airport spokesperson Andrew Gobeil told CNN’s Jim Acosta.

“When either the officer went in or when the passenger went in to get it, it accidentally discharged,” Gobeil said, and the loud noise created a “sense of chaos.” According to Gobeil, after the gun went off, the passenger “took off and was able to make it outside of the airport.”

The airport has since resumed normal operations, officials said in another statement around 3:30 p.m. Twitter users report that the airport is still in a state of confusion, some noting long lines and missed flights.

Delta issued a travel waiver to assist customers who were impacted by the incident, the company announced in a statement. Customers’ fare difference will be waived if their rebooked flight occurs on or before Nov. 23 in the same cabin originally booked.

Channel 2 Action News reported that the Transportation Security Administration said all passengers in the airport are being re-screened.

There is not an active shooter. There was an accidental discharge at the Airport. There is no danger to passengers or employees. An investigation is ongoing, more information will be published on this channel.

An unintentional gun discharge in the Atlanta airport caused mass panic today among passengers who thought there was an active shooter.

Atlanta airport employee Shantoria deserves a *major* raise for letting my husband and I jump in her car and driving us to safety amid total (what we thought was) active shooter chaos. Hundreds of panicked people screaming and running. Thank you, Shantoria. pic.twitter.com/gnJoKJUYA5

Some of the aftermath from the chaos at Atlanta airport. pic.twitter.com/EkP6xs1ViG

Ghost town after reported shooter in Atlanta airport. Been advised it was an accidental discharge but we’re still shut down. pic.twitter.com/0VpigDJRkS

Panic at the Atlanta airport just after 1:30 PM. pic.twitter.com/J6OXqk2iJB

The is what I am seeing outside my window. I am at the Atlanta Airport, boarded my flight to New York when we heard screams. ⁦@Delta⁩ is trying to calm people down. We heard screams as people were boarding. pic.twitter.com/y2wEp974NC