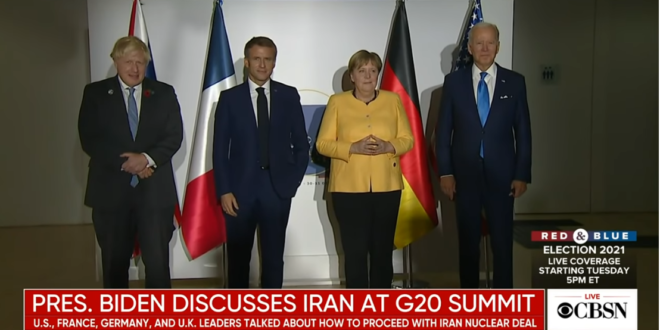 Western Leaders Issue Statement On Iran’s Escalating Nuclear Program: They Can Never Have A Nuke [Video]

We, the President of France, Chancellor of Germany, Prime Minister of the United Kingdom, and President of the United States, met in Rome today to discuss the risks posed to international security by Iran’s escalating nuclear program.

We expressed our determination to ensure that Iran can never develop or acquire a nuclear weapon and shared our grave and growing concern that, while Iran halted negotiations on a return to the Joint Comprehensive Plan of Action (JCPOA) since June, it has accelerated the pace of provocative nuclear steps, such as the production of highly enriched uranium and enriched uranium metal.

Iran has no credible civilian need for either measure, but both are important to nuclear weapons programs.

These steps have only been made more alarming by Iran’s simultaneously decreased cooperation and transparency with the International Atomic Energy Agency (IAEA). We agreed that continued Iranian nuclear advances and obstacles to the IAEA’s work will jeopardize the possibility of a return to the JCPOA.

We are committed to continuing to work closely with the Russian Federation, the People’s Republic of China, and the European Union High Representative, as Coordinator, in resolving this critical issue.

The current situation underscores the importance of a negotiated solution that provides for the return of Iran and the U.S. to full compliance with the JCPOA and provides the basis for continued diplomatic engagement to resolve remaining points of contention – both our concerns and Iran’s.

President Biden and three European leaders signaled to Iran that they are ready to return to the scuttled deal that eased sanctions against the country in return for Iran limiting its nuclear program and opening it up to inspections. https://t.co/1PKGmaT3d9