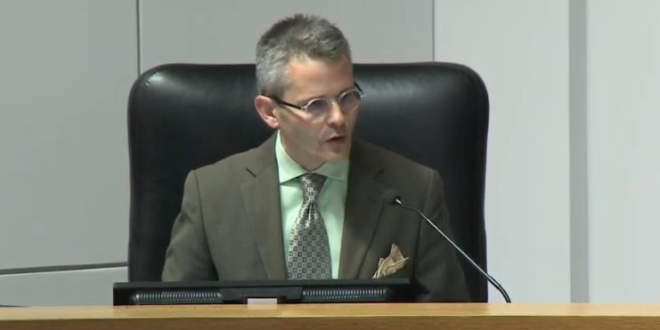 After four months of delays, Wichita City Council passed a nondiscrimination ordinance Tuesday aimed at banning discrimination in housing, employment and public accommodations. The council voted 6-1 to approve the ordinance, with Jeff Blubaugh voting against.

The council also rejected a carve out that would have allowed religious groups to fire or refuse to hire LGBTQ+ individuals at will, an amendment proposed by City Council member Jared Cerullo [photo], the first openly gay man to serve on the council.

Passage of the ordinance signals a major policy win Mayor Brandon Whipple, who promised the change during his 2019 campaign and brought the proposal to the council in June.

Over a dozen other Kansas municipalities, including the capital, Topeka, have LGBTQ protections at some kind. Wichita is the state’s largest city with a population of around 400,000.

BREAKING: Wichita’s Non-Discrimination Ordinance has PASSED with a 6-1 vote WITHOUT the controversial carve-out allowing religious groups additional opportunities to discriminate.

This is a huge win to protect equality in the Wichita community.https://t.co/CEM5TQjsQ1