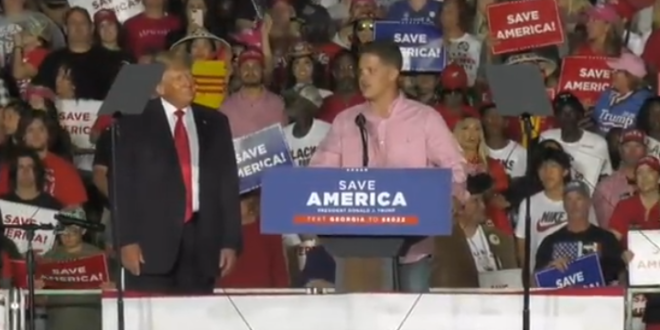 During a rally in Georgia over the weekend, former President Donald Trump invited Lance Cpl. Hunter Clark to the stage, implying he was the Marine in a viral video who lifted a child over a wall at the airport in Kabul, Afghanistan.

Clark told the audience Saturday: “I am the guy that pulled the baby over the wall and it’s definitely probably one of the greatest things I’ve ever done in my entire life.” Clark then thanked the audience for their support before leaving the stage.

Problem is, the Marine Corps says it wasn’t Clark in the video. “Regarding the viral photo that began circulating around August 20, 2021, the Marine identified in that particular image was not LCpl Clark,” Kelton Cochran, a spokesman for the 24th Marine Expeditionary Unit said in a statement.

Now Clark’s command is looking into whether he violated the military’s ban on active-duty troops engaging in partisan political activity.

“The 24th Marine Expeditionary Unit (MEU) has initiated a command investigation regarding LCpl Hunter Clark’s attendance at the event last weekend to determine if any DoD policies were violated,” Cochran said. “Any details pertaining to this incident are not releasable while the investigation is being conducted.”

In a statement Wednesday, a US Marine Corps spokesperson said Lance Cpl. Hunter Clark was not the individual who lifted the child over a wall in the viral image and that Clark is now being investigated for his appearance at the rally. https://t.co/INkE77P2hr

LCpl Hunter Clark emotionally remembers the day he pulled a baby over the wall in Kabul.

See his reaction and President Trump’s grateful thanks for Clark’s service on our broadcast of President Trump’s #TakeBackTour #SaveAmericaRally from Perry, GA. https://t.co/oewR8mnkCW pic.twitter.com/BFjQbbiLwR

Previous Australia To Open Border For First Time Since COVID
Next Fox Host: The COVID Vaccine Is “Not Really A Vaccine”