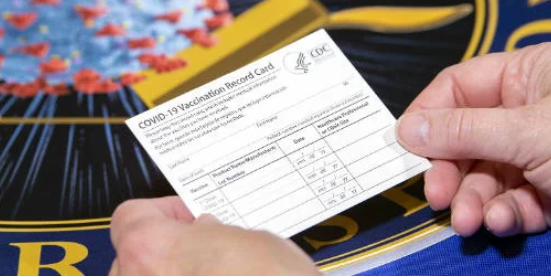 One of Mayor Bill de Blasio’s vaccine mandates has taken its toll on an unintended victim — the social life of underage city partiers. Legions of young Big Apple bar and club fans who rely on fake IDs to gain entry into local hot spots are now having trouble getting past the door because they also have to show proof of their COVID-19 vaccination — and the birth dates on both identifications don’t match up.

College junior Sylvie told The Post that she turns 21, the state’s legal drinking age, in three weeks — and her big day can’t come soon enough. She said she was easily slipping into her neighborhood booze haunts pre-coronavirus with her fake ID. But since August, when the city began requiring people to show proof of vaccination to enter such indoor establishments, the immunized 20-year-old has been pretty much out of luck.

One bouncer at a Brooklyn music venue who spoke on the condition of anonymity said that “I see so much elaborate nonsense when it comes to this.”

“Kids will come up saying their phones are dead and they left their wallets, or show an ID that’s obviously not them and then show a COVID card where neither their names or ages match,” he said. “Of course I turn them away, and I politely tell them I am aware of what they’re trying to do.”

Overall, the bouncer said that the vaccine requirements make him take checking IDs “more seriously” than he has in the past. “I would definitely say bouncers care more about it,” he said. “You need two forms of identification now, period.”

The former college bar bouncer in me is laughing.https://t.co/0D84rCxoJd via @thedailybeast