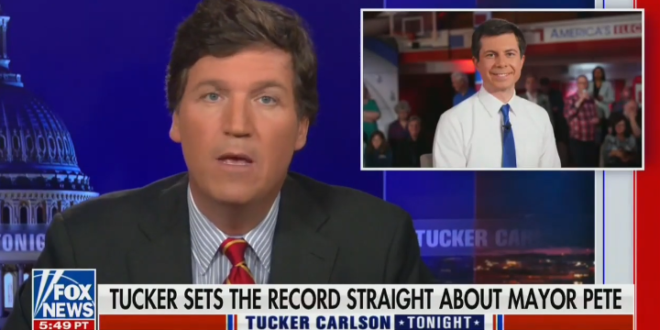 “Last night on this show we made a brief, offhand joke about the Secretary of Transportation Pete Buttigieg, and this morning we discovered our error.

“It turns out that Buttigieg is not a dwarfish fraud whose utter mediocrity indicts the class that produced him. No, not at all.

“Pete Buttigieg was once the mayor of South Bend, Indiana. So understandably, going forward, we are under strict orders from the Biden administration to take Pete Buttigieg very, very seriously.

“And of course we will. Our mistake.” – Tucker Carlson, one night after saying that Buttigieg is “trying to learn how to breastfeed.”

Sec. Pete Buttigieg calls out Tucker Carlson for the attack on his parental leave, “This attack is coming from a guy who has yet to explain his apparent approval for the assassination of Harvey Milk, ” pic.twitter.com/DsyQgCyUNO