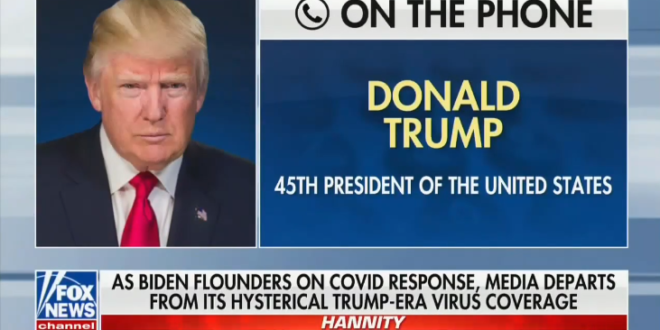 Donald Trump criticized President Joe Biden‘s handling of the Covid pandemic on Thursday, and blamed vaccine hesitancy on a lack of trust in Biden. “During my administration, everybody wanted the vaccine,” Trump said in a phone interview with Sean Hannity.

“There was nobody saying ‘oh, gee, I don’t want to take it.’ Now they say that and that’s because they don’t trust the Biden administration. I can think of no other reason.” He added, “When I was there, everybody wanted it.”

Trump has encouraged his supporters to get vaccinated on a few occasions (and was booed when he did so during a rally), while underscoring the importance of “freedom” to decide.

Trump Blames Lack of Trust in Biden for Vaccine Hesitancy: ‘I Can Think of No Other Reason’ Why People Won’t Get the Shot https://t.co/q5e4nz1449

Trump Rants That Bringing In Haitian Migrants Is a ‘Death Wish’ Because ‘Many of Those People Will Probably Have AIDS’ https://t.co/HuI2TRxARZ

Trump Angrily Rants Against McConnell in Call for New Republican Leadership: ‘Mitch is NOT the Guy’ https://t.co/ztPvxf7LFB