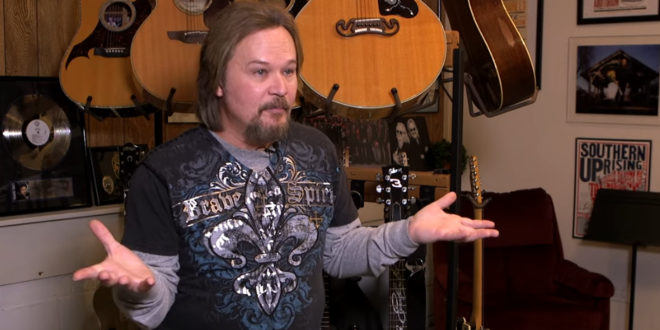 Country music star Travis Tritt sang the national anthem before Game 6 of the National League Championship Series on Saturday amid his very public declaration not to perform at venues that require any kind of coronavirus vaccine or mask mandate.

Wearing a Braves jersey, Tritt received a smattering of applause when he was announced as a “country music legend.” There was a problem with Tritt’s microphone, but a worker quickly handed him a backup mic that allowed him to sing “The Star-Spangled Banner” without any further issues.

The Braves’ stadium, Truist Park, has allowed full capacity with no requirements for vaccinations, negative tests or mask-wearing from fans. Major League Baseball does require vaccines for non-playing personnel to be allowed access to the field. Tritt sang the anthem from the Truist Club seating area behind the backstop.

Read the full article. His performance was not televised.

So the wing nut cancel culture tried to pressure the Atlanta Braves into forcing me not to sing the National Anthem at Game 6 of the NLCS. I’m so thankful that the @braves did not cave to this pressure and refused to be bullied. Thanks for allowing me to pay tribute to America.🇺🇸

Atlanta lost the MLB All Star Game because of left wing morons. More than fitting that half of the World Series games will be played in Atlanta. Karma is a cruel bitch!

I can’t help but laugh at watching losers cry like babies! 😂😂😂

Travis Tritt, who recently drew criticism for his refusal to play at venues that enforce vaccine and mask policies, sang the National Anthem prior to tonight’s playoff game between the Los Angeles Dodgers and Atlanta Braves: https://t.co/9oLVQkkXYs pic.twitter.com/RLHGl65ttc

Just found out that Travis Tritt blocked me.

I’ve never interacted w/him,
or criticized him for being anti-vax.
I’ve often praised his cover of Elvis’ “Burning Love.”

So I guess it’s ok to point out
that homeboy’s clearly not afraid
of injecting toxic things
into his forehead. pic.twitter.com/B7A1dJtMkr