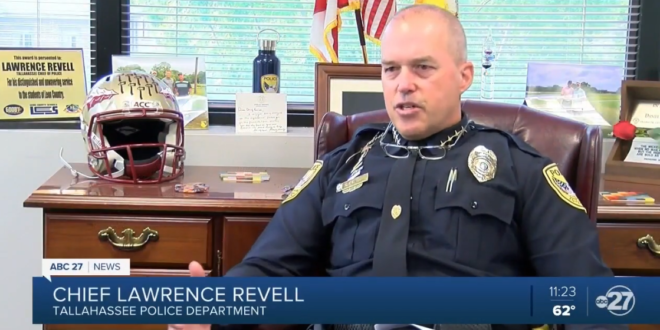 Tallahassee Police Chief: I Was “God’s First Choice” For This Job, My “Number One Priority” Is To Proselytize

Tallahassee Police Chief Lawrence Revell this week spoke at an all-expenses-paid three-day retreat at one of America’s most notorious homophobic institutions: the Billy Graham Evangelistic Association (BGEA). BGEA hosted the three-day long Chief Law Enforcement Officer Appreciation Event retreat from September 28-30th at the opulent Billy Graham Training Center at the Cove. Tallahassee Police Department Chief not only attended the event, but even spoke at it as well.

“While I wasn’t the City’s first choice, I was God’s first choice,” Revell says in the recording, discussing his highly controversial appointment as Tallahassee’s Police Chief. Revell discusses how it should be the “number one priority” for police chiefs to spread Christianity in the ranks of their police departments. “What is your agenda to share the gospel of Jesus Christ to your officers?”

As you might imagine, our friend Hemant Mehta has quite a bit to say about this at The Friendly Atheist. As he points out, there would be an insane outcry if, say, a Muslim police chief made a similar call at an Islamic event to proselytize within the ranks and to the public.

Back to the issue at hand: Chief Revell didn’t start off on the best foot with those in town who aren’t religious or are part of a religious minority by having a swearing-in ceremony rife with religious rituals that “started in prayer and ended in prayer.”https://t.co/e38e7gLtES