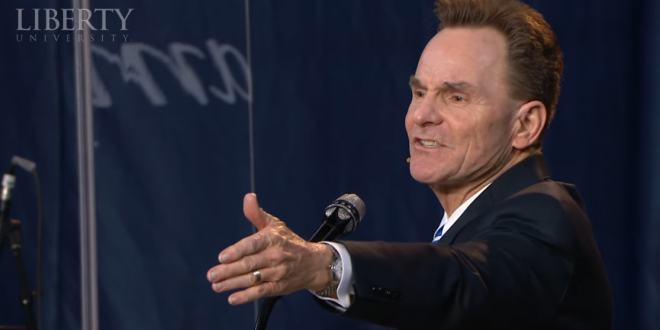 “Due to my personal integrity and the leadership responsibility entrusted to me, I will not and cannot any longer fulfill the duties placed upon me as the leader of the executive, fiscal, and fiduciary entity of the SBC,” Floyd wrote in a letter sent to the executive committee members Thursday night.

The executive committee, which handles convention business when the full SBC isn’t in session during its two-day annual meeting, met in recent weeks to vote on waiving attorney-client privilege for an investigation into the committee’s handling of sexual abuse claims.

In 2015, Floyd called for civil disobedience against the Supreme Court’s ruling on same-sex marriage, declaring that God will punish Christians who accept the decision. Later that year he suggested that Josh Duggar cheated on his wife because she didn’t put out often enough.

BREAKING: Ronnie Floyd, president and CEO of the Southern Baptist Convention executive committee, resigns. For the time being: https://t.co/qXOv1XnGnq
(More to come).

Top Southern Baptist Convention executive resigns after a dispute over an investigation into the handling of sex abuse allegations https://t.co/ZKGOKNLsTu

As the debate over the investigation went on, some Southern Baptists had been calling for Ronnie Floyd to resign … but not for the reasons he gave.https://t.co/gGBpCYu4fu

Breaking: Ronnie Floyd is stepping down.

The Southern Baptist Executive Committee has lost ten members, its legal counsel, and now its president over its decision to open up to a third-party abuse investigation.https://t.co/w2GU3YxsNd