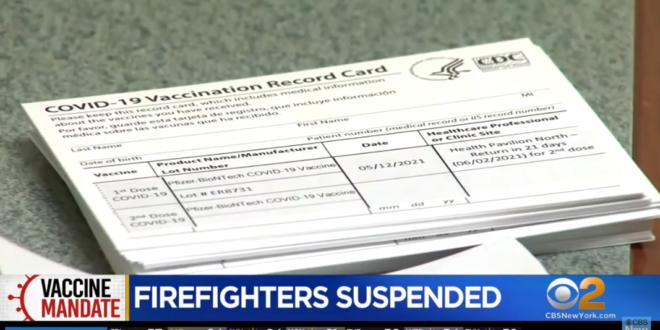 Six FDNY members of Ladder 113 have been suspended for allegedly driving their truck to a state senator’s New York City office and threatening his staff over the vaccine mandate for city workers.

The on-duty firefighters drove an in-service ladder truck to state Senator Zellnor Myrie’s office in Brooklyn on Friday and questioned staff as to where the politician lives, a department spokesperson confirmed.

The crew is accused of telling his staffers they would have “blood on their hands” Monday when unvaccinated workers must go on unpaid leave. The group of firefighters also allegedly told the staff that if a fire was reported at Myrie’s home they would not respond.

Members of @FDNY Ladder 113 drove their truck to @zellnor4ny‘s office and threatened his staff, telling them they’d have “blood on their hands” on Monday, because of the vaccine mandate. Commish Nigro tells @NBCNewYork they’ve been relieved of duty and will face discipline.

NBC News: 6 FDNY firefighters have been suspended for taking Ladder 113 an on-call and in-service truck to a state senator’s office to threaten and protest the city’s vaccine mandate.