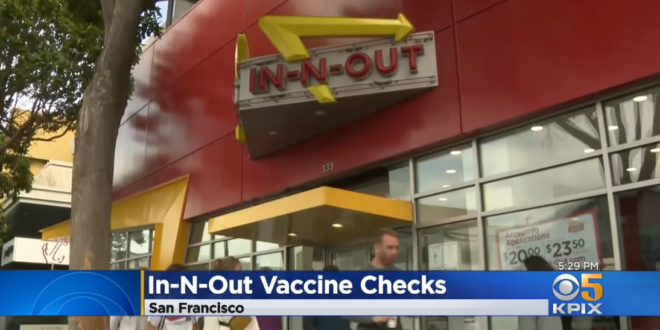 The In-N-Out hamburger chain is sizzling mad after the city of San Francisco shut down its indoor dining for refusing to check customers’ vaccination status, as is required by a local mandate. The company’s Fisherman’s Wharf location — its only one in San Francisco — was temporarily shut by the Department of Public Health on October 14. Authorities said the burger chain refused to bar clients who couldn’t show proof of vaccination to dine indoors, as required by a city mandate that took effect August 20.

In-N-Out ignored repeated warnings to enforce the vaccination rule, the department said, calling the mandate a matter of public health to keep COVID-19 from spreading. “We refuse to become the vaccination police for any government,” Arnie Wensinger, the chain’s chief legal and business officer, said in a statement. In-N-Out said it considered the enforcement requirement an intrusive and offensive measure that would force it to discriminate against customers.

In a statement provided to Eater SF, In-N-Out Chief Legal & Business Officer Arnie Wensinger says the company believes requiring its staff to enforce a vaccination mandate constitutes government “overreach” and is refusing to do so. “We fiercely disagree with any government dictate that forces a private company to discriminate against customers who choose to patronize their business,” Wensinger’s statement reads. “This is clear governmental overreach and is intrusive, improper, and offensive.”

The owner and president of In-N-Out Burger revealed in a rare interview why the company prints Bible verses on its packaging and how that ties into her own personal Christian faith.

Lynsi Snyder, the 37-year-old CEO and granddaughter of the chain’s founders, revealed to The Christian Post she turned to God after she lost her father as a teenager and later went through three failed marriages that sent her down a dark path.

“I finally found that the deep need in my heart can only be filled by Jesus and my identity in Him,” she said. She’s taken this realization and carried it with her throughout all aspects of her life, including the way she runs her company.

“We refuse to become the vaccination police for any government,” a spokesperson for the fast-food chain said. https://t.co/fuZtAuV9mM

Previous Graham: Thank Jesus For Saving Us In Plane Crashes
Next Former College Coach To Sue Over Vax Refusal Firing