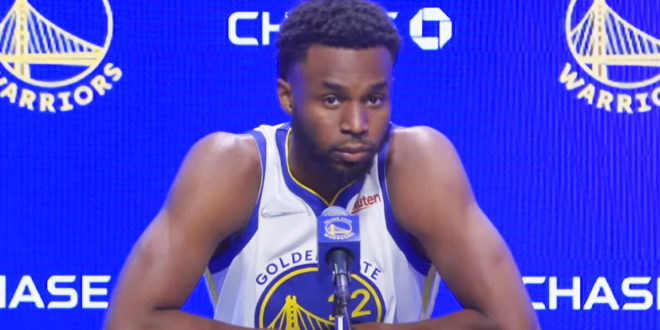 Andrew Wiggins, the Golden State Warriors forward who balked being vaccinated against the coronavirus, has been vaccinated, the team’s coach said Sunday. “He just told me today that he was fine with us acknowledging it, and that will be the end of it,” coach Steve Kerr told reporters. Wiggins, who had sought a religious exemption from San Francisco’s vaccination requirement, was one of several NBA players who had declined to get the shots.

Wiggins drew even more attention to the issue during Warriors media day last Monday when he said it was his issue to deal with, not reporters’, as it pertained to the possibility of lost earnings. “It’s my problem,” he said at the time. “Not yours.” Wiggins applied to the NBA for a religious exemption, but that was declined by the league. While Kerr and the Warriors did not want to go into any specifics about Wiggins’ decision or the type of shot he received, all signs point to it being a Johnson & Johnson shot.

Andrew Wiggins, who was one of four well-known NBA players refusing to get a COVID-19 vaccine shot, has been vaccinated. @Sarah_IsabelVee https://t.co/64WIsaSjRl