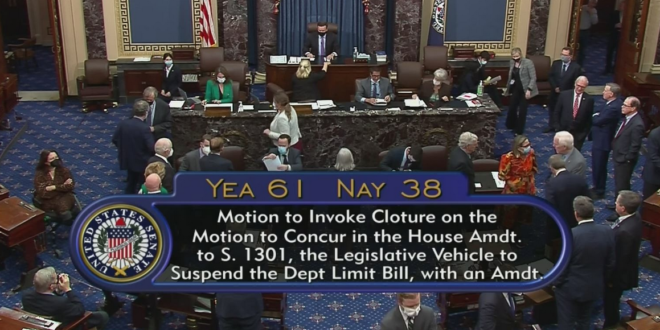 The Senate has passed a bill to increase the federal debt ceiling, after weeks of tense cross-aisle negotiations regarding the looming threat of the country defaulting on its debt. The legislation was approved Thursday night along party lines, with a simple majority. An earlier procedural vote required Republicans to get to 60 votes. It got 61. House approval is still needed.

The votes followed a bipartisan deal from Senate Majority Leader Chuck Schumer, D-N.Y., and Republican Leader Mitch McConnell, R-Ky., to avoid the immediate threat of default by shifting the debt limit deadline to early December. The bill would increase the borrowing limit by $480 billion. The Treasury Department estimates that amount should be sufficient to keep debt payments flowing until Dec. 3.

61-38: Senate ends a filibuster against increasing the debt ceiling by $480 billion to December 3rd. 60 votes were needed.