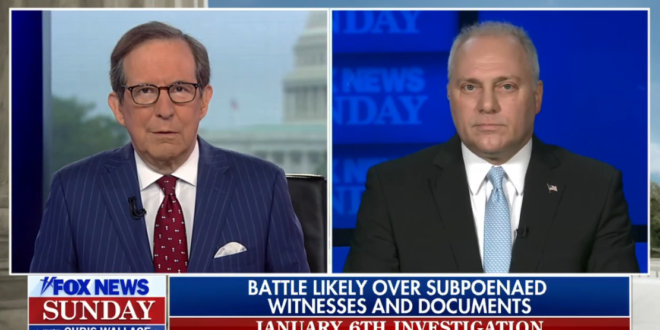 House Minority Whip Steve Scalise (R-La.) on Sunday repeatedly avoided answering whether or not believes the 2020 presidential election was “stolen,” after Fox News’ Chris Wallace pressed him on the matter.

Appearing on “Fox News Sunday,” Scalise blasted the Biden administration’s handling of the economy, the COVID-19 pandemic and the two major bills that have stalled in Congress.

After Scalise’s numerous condemnations of the White House, Wallace specifically asked the GOP leader if he believed the 2020 election was stolen from former President Donald Trump and whether such claims undermines American democracy.

Scalise again refused to give a yes-or-no answer. “It’s states that did not follow the law set,” the Louisiana Republican opined. “When you see states like Georgia cleaning up some of the mess and people calling that Jim Crow law. That’s a flat-out lie.”

House GOP Whip Steve Scalise, the No. 2 in his conference, won’t say after multiple attempts on Fox whether he thinks the 2020 election was stolen.