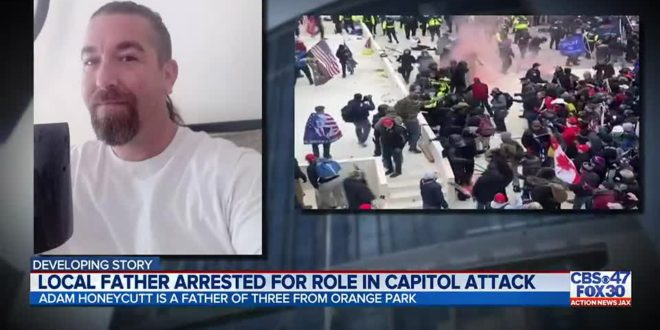 An Orange Park man who was found with illegal guns and drugs in his home during the execution of a search warrant connected to his role in the Capitol riots was sentenced on Wednesday. Adam Honeycutt, 40, was sentenced to 18 months in federal prison by Senior District Judge Harvey Schlesinger after he was found with four unsecured handguns and marijuana in his home in February. He will likely get credit for eight months he has already served, a prosecutor said.

“I know I messed up. I was wrong,” he told Judge Schlesinger. In a separate case related to his role in the Jan. 6 riot, Honeycutt is charged with entering a restricted area without lawful authority, which carries up to one year in prison plus fines, and violent entry and disorderly conduct on Capitol grounds, which carries up to six months in prison and a $5,000 fine. He is expected to have a court date in January.

An Orange Park man who was found with illegal guns and drugs in his home during the execution of a search warrant connected to his role in the Capitol riots was sentenced. https://t.co/ml16ohjjZS

Here’s a sort of interesting status for a Jan 6 defendant. Adam Honeycutt is (was?) a bail bondsman from FL who therefore should have known better than to post this picture holding the broken leg from the trashed Sergeant of Arms office.

He was arrested on February 11. pic.twitter.com/EJ0MzMmJjz

Legal troubles mount for Adam Honeycutt, a Florida defendant in US Capitol breach

Now he’s pleaded guilty to an unrelated firearms charge stemming from raid on his house after Jan 6 pic.twitter.com/3E0dPYvSwf

The FBI tracked down Florida bail bondsman Adam Honeycutt after he posted a pic online of a broken chair leg from the Capitol. Honeycutt later downplayed his role in breaching the building saying he was “at the food truck when the shit hit the fan.” pic.twitter.com/AKiiVaQ6IL