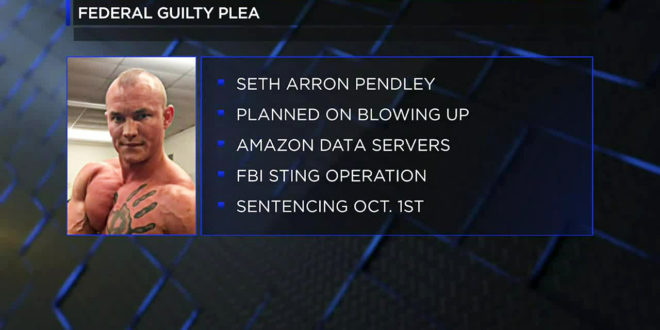 Rioter Gets 10 Years In Plot To Bomb Amazon Servers

A Texas man who plotted to blow up a data center in Virginia was sentenced today to 10 years in federal prison, announced Acting U.S. Attorney for the Northern District of Texas Prerak Shah.

Seth Aaron Pendley, 28, was arrested in April after attempting to obtain an explosive device from an undercover FBI employee in Fort Worth. He pleaded guilty in June to malicious attempt to destroy a building with an explosive and was sentenced today by U.S. District Judge Reed C. O’Connor.

In plea papers, Mr. Pendley admitted that he disclosed his plan to blow up an Amazon data center to a confidential source in January.

In late February, he sent the source a list of potential targets and said he hoped a successful attack could “kill off about 70% of the internet.” When the source offered to help him obtain C4 explosives to use in the attack, Mr. Pendley responded enthusiastically.

He later showed the source a hand-drawn map of his chosen data center and described how he planned to disguise his car to evade detection by law enforcement.

In late March, the confidential source introduced Mr. Pendley to an individual who he claimed was his explosives supplier, but was actually an undercover FBI employee. In recorded conversations, Mr. Pendley allegedly told the employee he planned to attack web servers that he believed provided services to the FBI, CIA, and other federal agencies.

“The main objective is to f*** up the Amazon servers,” he said, adding that he hoped to anger “the oligarchy” enough to provoke a reaction that would convince the American people to take action against what he perceived to be a “dictatorship.”

The feds were first tipped off to Seth Aaron Pendley’s alleged plans when a “concerned citizen” reached out about disturbing posts on https://t.co/JM1ox11LsP https://t.co/gTwAOMVfqU

Prosecutors said that Seth Aaron Pendley, 28, of Wichita Falls, Texas, had also boasted that he was at the Capitol on Jan. 6. when Trump supporters stormed the building. https://t.co/hzFArVqIey

Seth Aaron Pendley, a man who plotted to blow up a data center in Virginia, was sentenced today to 10 years in federal prison following an investigation by @FBIDallas and the North Texas Joint Terrorism Task Force.https://t.co/mOezzZf3GE pic.twitter.com/NR8XBoYMQ8

BREAKING: A Texas man has been sentenced to 10 years in federal prison for plotting to attack an Amazon data center, the DOJ says. @EamonJavers reports. pic.twitter.com/Uv5boQLqhP

Previous SD Gov Denies “Special Treatment” For Her Daughter
Next BOOK: Melania Set Up Google Alerts About Herself