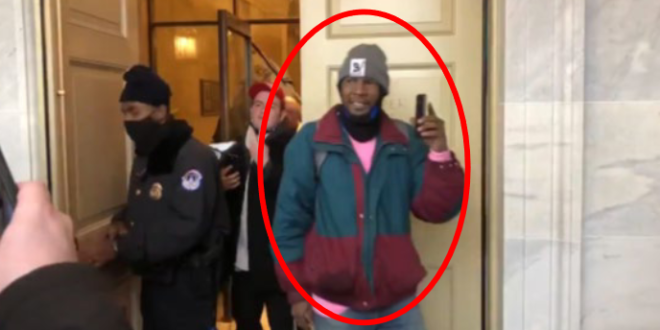 A right-wing radio host stole the baseball cap worn by a U.S. Capitol Police officer who defended Congress on Jan. 6 and wore it during a live stream of one of his broadcasts, federal authorities claimed in court papers released on Monday. Three witnesses who worked at his media outlet allegedly told the FBI that he boasted about stealing several other items from the officer and china plates from the building.

Charged under seal on Sept. 30, Global Enlightenment Radio Network host Darrell Neely was arrested on Monday, and court records show that three other people who worked with him at the radio station led the FBI to him. Those three witnesses each told authorities that they spoke to Neely on the day of the siege of the U.S. Capitol in video calls and a Facebook messenger chat.

In newly unsealed charging docs for Jan. 6 defendant Darrell Neely, feds incl. a pic of him wearing what they allege is a stolen US Capitol Police officer hat during a YouTube broadcast https://t.co/x49H6OgsVY pic.twitter.com/jOrwk5tieQ

In newly unsealed Jan 6 case, feds allege Darrell Neely posted a video of himself wearing a US Capitol police hat…. days after the riot.

Per charging documents, witnesses say Neely made video call on Capitol grounds .. and was showing a Capitol Police jacket and a china plate pic.twitter.com/XzbLjLxaq6

Darrell Neely, a right-winger who hosted a show on something called the “Global Enlightenment Radio Network,” has been charged in connection with the Jan. 6 attack. Feds say he wore a stolen U.S. Capitol Police hat in a YouTube video on Jan. 7. pic.twitter.com/WvXrdsgGsi