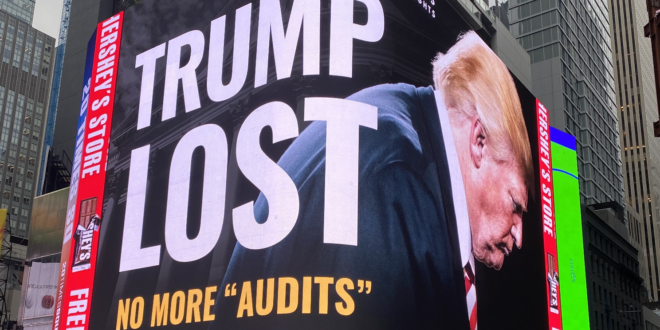 A Republican group is using billboards to send a blunt message to Donald Trump and his supporters who are still pushing for election audits based on debunked claims of election fraud.

“TRUMP LOST,” the billboards from Republicans for Voting Rights read. “NO MORE ‘AUDITS.’” One billboard is in Times Square in New York.

The group said it plans to put up dozens of billboards in eight states, many near state capitol buildings and in locations where Trump supporters are pushing for audits, including Georgia, Florida, Texas, Pennsylvania, Arizona and Michigan.

Today, Republicans for Voting Rights (RVR) launched a billboard campaign across the country in response to reckless Republican calls for sham audits of the 2020 election. Here’s one we’ve put up in New York City’s Times Square: pic.twitter.com/96tweL9l9w