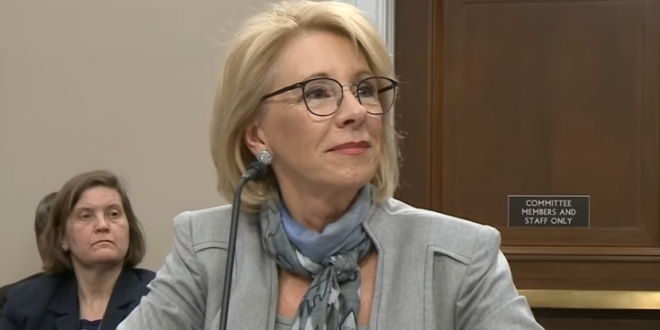 The family of former education secretary Betsy DeVos was misled by Elizabeth Holmes when the former Theranos chief executive convinced the billionaire dynasty to invest $100 million in the biotech start-up, a representative with the family’s office testified Tuesday.

Holmes, who is on trial for criminal wire fraud in San Jose, handpicked the DeVos family and other billionaire investors to fund the biotech start-up, said Lisa Peterson, who oversees private equity investments at the family’s office, RDV, and was in charge of handling the Theranos deal.

“She was inviting us to participate in this opportunity,” Peterson said of Holmes, according to the testimony. Peterson added of Theranos’s technology, “They were telling us that it worked. We relied on what they told us.”

DeVos family was misled by Elizabeth Holmes when they invested $100 million in Theranos, representative testifies https://t.co/WTGwBodfAs

Former Education Sec. DeVos was given false and misleading information before investing $100,000,000 into Elizabeth Holmes’ company Theranos, a representative for the DeVos family office says. https://t.co/lgsjLnXBTj

A representative for the family office of former Education Secretary Betsy DeVos took the stand Tuesday in the Elizabeth Holmes trial to discuss a roughly $100 million investment made in Theranos in 2014 https://t.co/OfByhIYKbJ