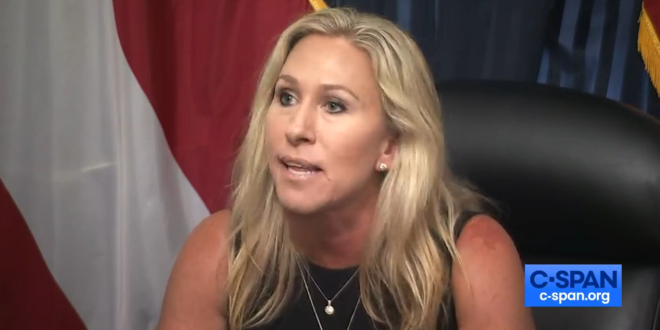 Rep. Marjorie Taylor Greene (R-Ga.), tangled with two members of the Jan. 6 committee on the House floor Thursday, getting into an impromptu shouting match over Black Lives Matter and a wild conspiracy theory about space lasers starting California wildfires.

“This is a joke,” Greene said in a raised voice to Raskin and Cheney, a Wyoming Republican, engaging in an altercation with the pair in the middle of the House floor. Then Greene walked closer and said directly to Raskin, “Why don’t you care about the American people?” Cheney responded to Greene by saying she was a “joke” and referred to a previous Greene comment about Jewish space lasers.

“I never said that!” Greene yelled back at Cheney. “You’re done. You’re a joke, Liz. Your party rejected you.” As Greene walked away from the pair, she suggested: “Why don’t you go investigate something that matters to the American people?”

“I said, ‘Like with Kyle Rittenhouse who went and killed two Black Lives Matter protesters? I’m sure there will be an opportunity for us to get to that,'” Raskin said. “And then, you know, it degenerated it from there as you can imagine.”

So, Marjorie Taylor Greene started shouting at Jamie Raskin and Liz Cheney. Raskin explains, via the pool: “I was just talking to Miss Cheney and then she started screaming at us, saying, ‘When are you going to start investigating murders over the summer and BLM?’