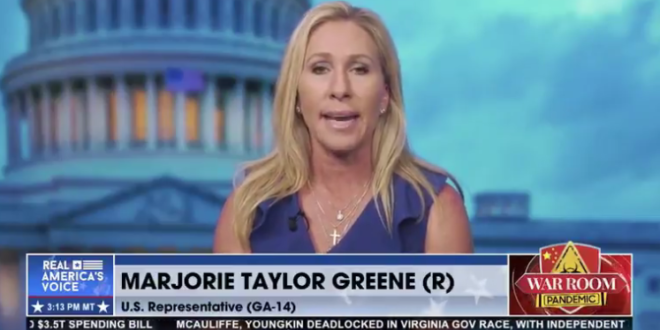 There was Georgia Rep. Andrew Clyde (R) casting the insurrection as “a normal tourist visit.” And Wisconsin Sen. Ron Johnson (R) insisting that it wasn’t an “armed insurrection” despite loads of evidence that it was. And House Minority Leader Kevin McCarthy (R) trying to cast Trump as blameless.

But all of these efforts were aimed at downplaying what happened that day. Which is what makes what Georgia Rep. Marjorie Taylor Greene (R) said in an appearance on Steve Bannon’s podcast Tuesday all the more fascinating and appalling.

“January 6 was just a riot at the Capitol and if you think about what our Declaration of Independence says, it says to overthrow tyrants,” Greene told Bannon.

Speaking on the conservative outlet Real America’s Voice, she added: “So there’s a clear difference between January 6 and the Marxist-communist revolution that antifa, BLM, Democrat ground troops waged on the American people in 2020.”

Ms Greene, who was elected last November to represent Georgia’s 14th congressional district, has emerged as one of the most strident politicians among the Republican caucus. Ms Greene’s admission the riot was just that, may trigger more trouble for her.

.@mtgreenee “Jan. 6 was just a riot…and if you think about what our Declaration of Independence says, it says to overthrow tyrants.” pic.twitter.com/zXcPjDDC1n

Marjorie Taylor Greene says “January 6 was just a riot at the Capitol” and media outlets “would do anything to cause someone like me to be killed.” pic.twitter.com/YSUqRAnEy4

Just as Trump did in his statement last week – and many in the party are moving with them. https://t.co/ykh3NHiMTA