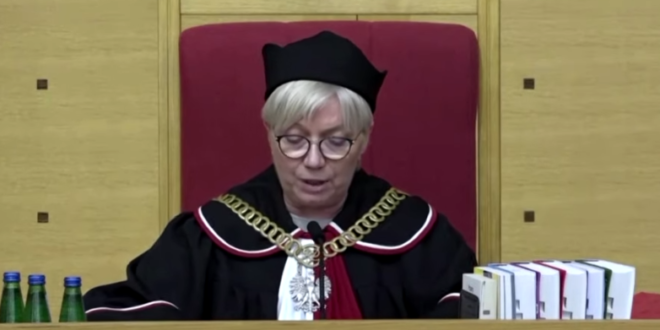 A Polish court ruling challenging the supremacy of EU law plunged the European Union into an existential crisis on Friday and raised the possibility of Poland leaving the 27-nation bloc. Politicians across Europe voiced dismay at the court’s move to undermine the legal pillar on which the EU stands, with one minister warning the eastern European country that it was “playing with fire”.

Ursula von der Leyen, President of the European Commission, said she was “deeply concerned” by the Thursday’s ruling by Poland’s Constitutional Tribunal and that the executive she leads would do all in its power to ensure the primacy of EU law. Welcoming the court ruling, Poland’s prime minister said his country wanted to stay in the wealthy trade and political group it joined in 2004 but that each member state must be treated equally and with respect.

Read the full article. Watch the clip below.

Today’s verdict in Poland cannot remain without consequences. The primacy of EU law must be undisputed. Violating it means challenging one of the founding principles of our Union.

We call on the @EU_Commission to take the necessary action.

🚨 Polish court rules that EU law is not compatible with the country’s constitution and asserts primacy of Polish law, and says EU cannot intervene in Polish judicial system.

This is a major escalation of the rule of law crisis between Warsaw and Brussels https://t.co/F3wN0PLphE

A Polish high court’s 12-2 ruling that Poland’s Constitution takes precedence over European Union law is likely to embolden the country’s right-wing government and worsen its already troubled relationship with the EU. https://t.co/QrnoFb2knf

Poland’s highest court has ruled that parts of EU law are incompatible with the Polish constitution, challenging the primacy of EU law, which is a central pillar of integration https://t.co/zpc5nws849 pic.twitter.com/Nz0IEhalTB

Amid all the talk about a supposed #Polexit, here’s a kind reminder on how much funding Poland gets from the EU. pic.twitter.com/fU3TXTWMBi