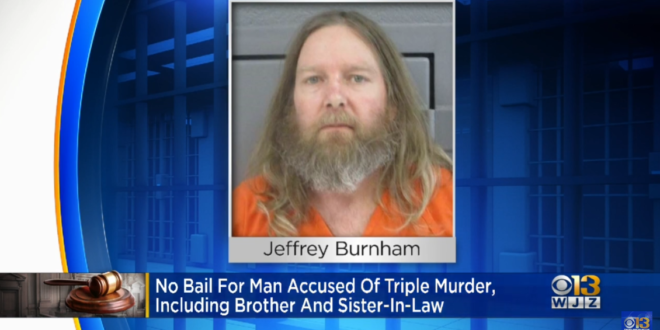 A Cumberland man allegedly killed his brother and sister-in-law in their Ellicott City home last week because his brother, a pharmacist, administered COVID-19 vaccines, according to charging documents filed Wednesday in a Howard County court. Jeffrey Burnham told his mother he had to confront his older brother, Brian Robinette, because he was poisoning people by administering the COVID-19 vaccine, telling his mother, “Brian knows something,” according to the new charging documents filed against Burnham.

Burnham is being held without bond in Allegany County, where he is charged with stabbing Rebecca Reynolds, 83, to death inside her Cumberland home on Sept. 29. Police said he took her car and fled to Ellicott City, where a day later he killed Robinette, 58, and his wife Kelly Sue Robinette, 57. He faces first and second-degree murder charges in the couples’ deaths. Burnham, 46, was captured last week in West Virginia following an 18-hour search.