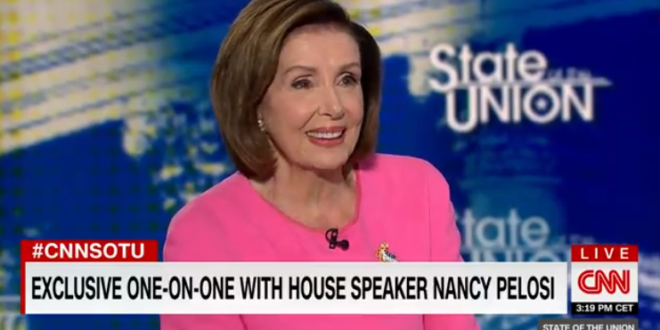 Pelosi Laughs Off Question About Running In 2022

Speaker Nancy Pelosi (D-Calif.) on Sunday laughed off a question about whether she would run for reelection in 2022, saying she would consult with her family before making her decision public.

Pelosi appeared surprised when CNN’s “State of the Union” host Jake Tapper asked about whether she would run again for her congressional seat, which she has held since 1987.

“I do want to ask about your own future in Congress. Are you going to run for reelection?” Tapper asked. “Why would I tell you that now?” Pelosi responded. “Probably, I would have that conversation with my family first, if you don’t mind.”

Read the full article. Pelosi, who won her district by 77 points in 2018 and who had no GOP opponent in 2020 due to California’s jungle primary system, has said that this would be her final term as speaker.

Democratic House Nancy Pelosi won’t say whether or not she plans to run for Speaker again if Democrats keep the House, telling @jaketapper she will that conversation with her family first. pic.twitter.com/BrvnGmcMsr

Previous Israel: No Entry If Last Dose Was Over Six Months Ago
Next Trump Developer Bids $120 Million For Surfside Lot