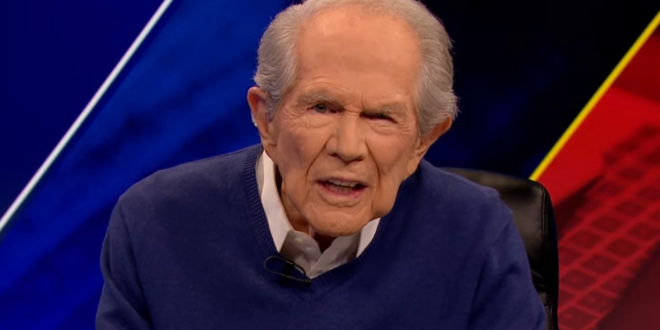 Pat Robertson Steps Down As Host Of The 700 Club

CBN Founder Pat Robertson, America’s longest-running TV host, is stepping down from his role as daily host of The 700 Club.

He announced on the 60th anniversary of CBN’s first broadcast that he is moving on to new projects. “Today’s show will be my final as host of The 700 Club,” said Robertson. “My replacement will be my very capable son, Gordon, who will take over as full-time host of the program.”

Robertson looks forward to devoting his energy and experience full-time to helping train and equip members of the 11,000-strong student body of Regent University as they are preparing to become “Christian Leaders to Change the World”.

Pat Robertson reports that he has been told by God that Trump will win reelection … and it will bring about the beginning of the End Times. https://t.co/mH5ERpBFCs pic.twitter.com/8WcYGxR3eO

Pat Robertson Blames COVID-19 on Gays, Abortion, and Those Who Are “Anti-Israel” https://t.co/RrbtuaWIzP pic.twitter.com/iMDDrAPmhH

In honor of Pat Robertson's retirement, we're gonna repost this 2013 clip where he claimed that gay people wear special rings to infect others with AIDS. CBN edited it out of the broadcast and then tried to take down our videos to hide it. They failed. https://t.co/7PllSbDn1F https://t.co/qREKV46oxx pic.twitter.com/u5Lnqwa1IA