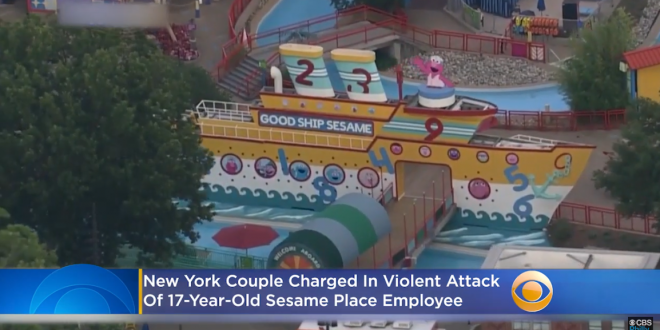 A New York man was sentenced to five to 10 years in prison Monday for assaulting a Sesame Place employee who asked him and his girlfriend to don face masks at the park in August 2020, an attack that left the teen worker with a fractured jaw.

“The impact this had on the victim is immeasurable,” Bateman said, noting 19-year-old Dillon Mays underwent multiple surgeries on his jaw and teeth after McCoy sucker-punched him.

My previous reports on the attack are here.

UPDATE: Long prison sentence for man convicted if sucker punching 17 yr old worker at Sesame Place who had simply asked the man to pull his mask up over his nose. Troy McCoy,40, taken away immediately from court to start 5-10 years in prison sentence 1/2 @FOX29philly pic.twitter.com/hrfDEi4GNp

2/2 “It was a violent, unprovoked attack on a defenseless teen” Bucks County judge told couple. Shakeera Bonds,32,sentenced to 4 to 23 months for her part in the violent assault that has forced victim to get multiple jaw & dental surgeries since August 2020 attack @FOX29philly pic.twitter.com/l4jCGM1dud