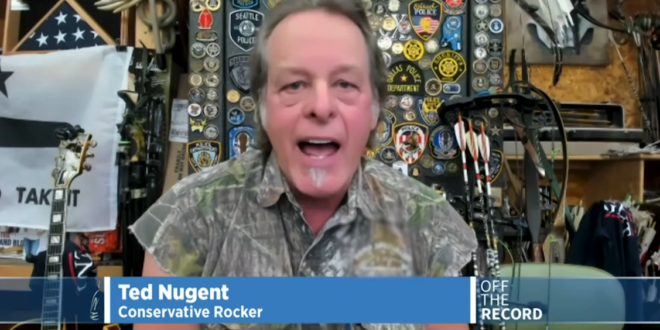 Nugent Bleats Like A Sheep To Mock “Stupid” Vaxxed

Ted Nugent appeared on PBS’ Off The Record, where he claimed that “I actually think that Covid-19 might be a weaponized virus created in Wuhan by Barack Obama, Nancy Pelosi and Fauci.”

“The only ones that are taking it are either gullible or being forced because they’re gonna lose their job, lose their life, and lose their livelihood,” Nugent claimed. “This is an experimental shot. If you try to give it to me, I’ll experiment on you.”

Read the full article. When the host asked Nugent if the millions of people who’ve gotten the vaccine are just stupid, Nugent responded with a string of sheep sounds. Nugent contracted a “very bad case” of COVID in the spring and then complained that people were hoping he would die. That was after he wondered why, if COVID-19 is so bad, “we didn’t shut down for COVID 1-18.” In June, he claimed that the Capitol rioters were “antifa and BLM in Trump shirts.” Ted Nugent has millions of followers across multiple social media platforms.